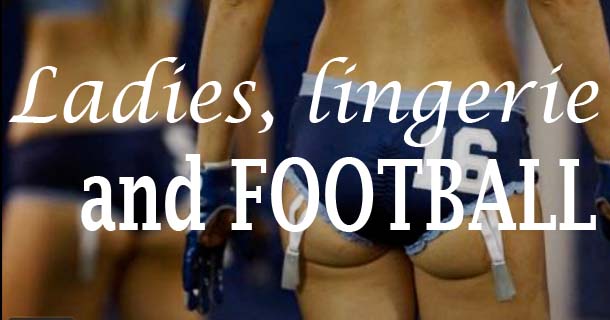 Twenty LFL games per season are currently broadcast on MTV2. Players aren’t paid but the organization does take care of their hair and nails and pays for tanning as well as travel and medical expenses. Each player must sign a waver to acknowledge that accidental nudity is a possibility. Official online videos promoting the “sport” look suspiciously like a combination of mud wrestling and call girl ads, while their promotional material includes exposed breasts and bottoms caused by the players grabbing at each others’ clothing.

Originating as a pay-per-view Superbowl stunt in 2004 using scantily clad models as players rather than experienced athletes, this U.S brand started out with 10 teams in 2009 and now has 12 franchises in it’s current season. Appearing in lingerie was cited as a way to appeal to a “mass audience” and “quickly expand it’s popularity”.

Although the initial Triumph team was supposed to be made up of ‘muscular’ athletes, only a third actually have any real football or athletic experience, many of the players are elementary school teachers, mothers and students. It’s not easy to get past the bikinis and garters and see these girls as creditable athletes. Although LFL Chairman Mitchell Mortaza had big plans for the league’s expansion into Canada “due to Canada’s fanaticism about sports”,  he says he’s been made to feel like he’s running a scandalous, exploitive operation. He believes perceptions will change once more people start seeing the games! Monica Bonczak from the Toronto Triumph on “Media Day”

Sadly the Toronto Triumph team were humiliated in their first two official games. After being beaten 48 to 14  by Tampa Breeze in September four players immediately resigned (including the captain) over the treatment of women who didn’t make the team. Then sixteen players walked out after expressing concern over safety issues. Equipment the team was using included hockey helmets instead of football helmets and undersized kiddies shoulder pads, and they were not provided with any medical staff despite the vulnerability of unprotected body parts, (nasty turf burns are common). Only six players remained of the original 26 strong team and tryouts were hurriedly held to recruit new players. Mortaza states that he wants to focus on real athletes versus “wannabes who are more interested in being celebrities than football players”. Unfortunately things didn’t get any better for them last week with a 42 to 6 thrashing by Baltimore Charm.

The first ‘Canadian Lingerie Bowl’ is scheduled to be held on Nov. 24, 2011 but with two disastrous games under Triumph’s belt and without a full roster, the league’s foray into Canada could end a little prematurely!

« Your Lingerie Star Style – The Fire and Air Signs 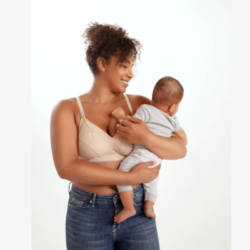