“La Decollette” is an anti- cleavage wrinkle bra which supposedly prevents the wearer from waking up with wrinkles between her breasts. It’s a cupless bra with padded fabric running between the breasts which when worn while sleeping keeps them separated and in place (especially for side sleepers), therefore preventing vertical wrinkles. Ultimo have launched a new product, the “Ultimo Icon”, hailed by its makers as “the solution to sagging” and “makes a woman’s décolletage look up to ten years younger”. It contains microscopic web fibres concealed within a compressed foam layer and a moulded sling to uplift and support the breasts.

A  Tennessee lady has invented the miracle “Backless Bra” for bustier women. She took apart one of her regular bras and recreated a new backless version which she then developed further for ABC reality show “American Inventor” as the 6-in-1 Bra.  Now she’s now collaborating with Maidenform Bras and utilizing their resources to perfect her design commercially.

The one-size Instant Uplift Bra has no cups and consists of a band of elastic to support the breasts and apparently help posture.  The band creates upwards lift while the back is similar in appearance to a sports bra and you wear it over your favourite bra. Unfortunately it looks like a harness and the two widely set straps and high back means that wearing anything slinky would be out of the question. An ‘intelligent fabric’ has been developed for testing bras in the lab. Containing many tiny sensors it monitors and measures even the smallest movement so bra manufacturers can work on reducing wobble by pinpointing faults in current bra designs.

Another new bra fabric has been developed in Japan which can potentially protect delicate breast tissue from harmful electro magnetic waves generated by computers. It’s interwoven with fine steel fibres, so I imagine going through airport security may be tricky!

The “Bra Angel” is a tiny but useful underwire repair kit. It sits neatly over the top of the escaped underwire end which you just push back into the hole and once fully inserted it should stay in place.

To avoid potential wardrobe malfunctions, bulging layers, and the need to constantly readjust your top, there’s now the “Cleava” – a snap-to-bra camisole. It’s a small triangle of fabric which snaps onto the bra straps providing the illusion of a modest undergarment.

“The Magsnaps Bra Converter” is a magnetic fastener which clips onto your bra’s existing hook and eye fastener and automatically matches and latches once the two ends are in close proximity. It’s an easy way to fasten and unfasten your bra if you have mobility problems.

And finally the “Clap Off Bra” will unclasp and fall to the ground at the sound of clapping.  According to the instructions “plug in the battery, put the bra on as normal using the electromagnetic clasp. When you are ready for it to come off, simply clap twice”.  I can think of all kinds of situations where this could be so inappropriate!

Let me know if you come across any interesting or fun new bra ideas,

How the Brazilian-cut panty is saving British fashion! » 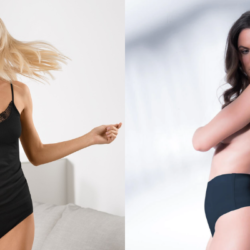 3 Types Of Underwear Everyone…

Bra Tips For People With…